So, now that I have my end user in mind, the next step is to choose the messenger, because my messenger is going to dictate my content.

In the film Ghostbusters, Gozer (a powerful being from another dimension) stands atop an apartment building on Central Park West in New York City, and informs the Ghostbusters that the next thing they think of will be the form that of the Destroyer, one whose mission is to destroy the world. While all the other members of the team clear their minds, Dan Akroyd’s character Ray allows his mind to wander to an innocuous memory of his youth: the Stay Puft Marshmallow Man.

For many who spend their days on the internet, and in my case in particular, it would appear this would be an easy decision…. pick up a domain name and either set up a blog or a web site. VIOLA! However, for my campaign, choosing the internet as my SOLE delivery device would be an equally poor choice. 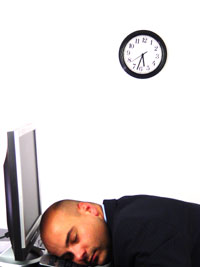 There are just times when your target audience just isn’t looking for your product or service on the internet.

This may be shocking for some of you. It’s okay. Breathe.

This revelation doesn’t mean that a web presence can’t act as a powerful marketing tool. What it does mean is that when your audience isn’t searching on the internet for your solution to their problem, you have to find another way to BRING them to your internet presence.

And that is where I find myself as I plan the marketing campaign for my own product.

I can CLEARLY see how my product can benefit my intended audience, but if I try to reach them solely via the internet, then I won’t be reaching a significant number of them to even justify the time/expense of putting up a specific web site for the campaign.

See, my target audience doesn’t KNOW that someone has created a solution to their problem!

Now, I can sit back and wait for them to stumble to the internet and type in the words I think they’ll use when they head to the internet seeking a solution to their problem. That would be the “easy” way for me at least. However, from my analysis of keyword searches, it doesn’t appear that my target market is heading to the internet for answers.

The lack of search on the keywords doesn’t mean my target audience isn’t EXPERIENCING this problem, it just means they aren’t searching for a solution on the internet.

Because I know my target audience so well, I know that the lack of keyword searches doesn’t mean I shouldn’t launch the product or even set up a web site. It simply means I can’t count on the web site to attract heavy traffic from my target audience.

I have to find another way to drive my potential customers to my web site!

Fortunately, I have one clear advantage in choosing the form of my messenger: I have a very tightly targeted audience in mind.

Because I have such a TIGHTLY targeted audience, I can reach them cost effectively via Direct Mail.

Because I’m going to have a web site to direct them to, I can rely on a relatively inexpensive method of Direct Mail called Postcard Marketing.

If you’ve got a product/service and you’ve been disappointed in your web site traffic and sales, it may be that your prospective customers either:

In either case, you may have to reach out and touch them and bring them TO your internet web site.

In my case, I can purchase a mailing list that goes ONLY to my targeted audience. SWEET! I then plan on creating a piece that brings my target audience to my shiny new web site where they will find a tightly targeted message created JUST for them.