“The rumor here in Austin is that Alexa is on the market. So perhaps this is just getting fresh lipstick on the pig.”

It made me chuckle… the thought of the “mighty” Amazon being depicted as a pig sporting lipstick. 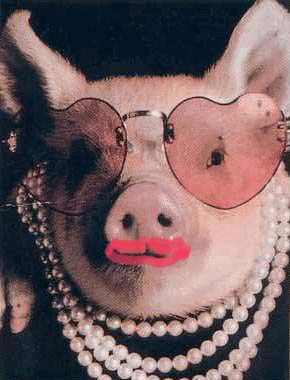 My love for Amazon is evidenced by my previous post An Important Lesson from Amazon on How NOT to Treat Your Customers, so you can see why such a comment would make me smile.

a) rumor has it that Amazon is trying to sell Alexa

b) Amazon is resorting to bullying tactics to try to prop up another Amazon property, BookSurge.

It’s Monday and I’m not spending too much time focusing my thoughts on the two points above. Instead, I’m working to clear my inbox of the pile up from the weekend.

Later on in the day, I checked my email and found an interesting email from Amazon. I get these emails because I’m a customer. In the email, they tell me that I’m getting this email because as a customer who has purchased baby related items in the past….

I am CERTAIN that I have NEVER purchased baby related items from Amazon. I can be REALLy certain because it’s been more than a decade since I’ve purchased baby related items PERIOD!!! Back in 1994, which was the last time I was in the “baby supply” market, Amazon was just a recently registered domain name and was barely a glimmer Jeff Bezo’s eye!!!

With the exception of the occasional baby shower I’ve attended over the past 13 years, I’ve moved WELL beyond the “baby related items” phase of my life. When invited to said showers, I usually show up in person, thereby negating any benefit from shopping online.

In other words, I usually make such a purchase whilst on my way TO said shower. I rarely plan in advance for such purchases and FREQUENTLY purchase the gift, the card and the gift bag at a store which is directly in my path to said shower. More times than I want to admit have I been in the situation of LUNGING at said gift recipient as she removes my gift from the bag as I remember that I forgot to take the price tag off of the gift as I stuffed it into the gift bag in the car.

Today’s email informs me that Amazon thinks I need to pre-order the Bugaboo Stroller, a stroller that retails for $899!!!

Unless one of my oldest daughter announces that she is expecting to give birth to an NBA or NFL star player’s offspring, I most definitely WILL NOT be in the market for a $900 stroller any time in the near future. (If my 20 year old daughter who is completing her sophomore year in college with the hopes of entering Pharmacy school next year announces she is expecting a baby from anyone LESS than an NBA or NFL star, then I’ll be expecting to spend my money on support and not wasting it on a super deluxe fleece lined stroller!)

So what’s up with Amazon?

First Amazon put on the bully hat and try to strong arm POD publishers into using Booksurge… then they begin putting lipstick on a pig in an effort to make Alexa a “better” traffic tool … and as such, one that’s more “marketable”. Now, they issue a customer alert that is so off target that I seriously have to consider hitting the “Mark as Spam and Report”.

What’s wild is my observations are in DIRECT conflict with “official” reports on Amazon. From the AWs Blog

In a new Business Week cover story, Amazon.com founder and CEO Jeff Bezos discusses his approach to innovation, thinking for the long term, our focus on the needs of customers, and our company culture.

Um… Jeff…. this is your FORMER customer speaking….. I’m sensing that you not only don’t know who I am, you don’t even know I’ve left the building. That’s the problem when you become the 900 lb gorilla as Amazon has grown to be in the online retailing world.