You are here: Home / Business Basics / Are your customers wearing tin foil hats? 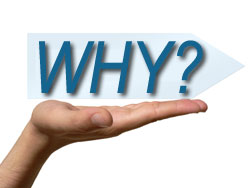 In Business Building Strategy: The most important question of all…, I suggested that the word”why” can turn a simple complaint into an essential business building strategy question.  Sometimes – a series of very mystifying actions can have their root in a very simple disconnect which can be quickly and easily discovered by simply asking “Why?”

For example, let’s say you’re taking a walk through the park.  You come across a man wearing tin foil hat who is hiding under a metal park bench.  Words like “idiot” and “crazy” will quickly come to mind – and to be honest, it’s easiest to dismiss his actions as that and move on.   However, asking our mystical magical question, “Why?” can lead to some insight  into customer buying behavior.

Perhaps our friend in the park is wearing the tin foil hat and hiding under the metal park bench to prevent aliens from reading and manipulating his thoughts.

Think about it for a moment – if there really WERE aliens with the ability to control minds orbiting the earth in their cloaked space ship – this man’s actions would be perfectly rational – even sane.  The disconnect lies in a belief about aliens orbiting the earth.  If I thought there were aliens  –  I too would be wearing my own tin foil hat.

By asking “why” I can quickly ascertain that there will be no meeting of the minds with the fellow in the tin foil hat in the park. I can’t make the leap to my way of thinking – and he can’t join me.

How does this apply to your business?

When you know that answer  – the REAL answer – to the question above, the world becomes your oyster!

However, there’s a catch to all of this: you can’t directly ask your customers why they’re buying your products or services.

It’s been estimated that up to 90% of a buying decision is sub-conscious and because it’s subconscious – it takes some digging to discover WHY someone is buying what they buy.  It’s a process I go through in great detail in my book Beyond the Niche: Essential Tools You Need to Create Marketing Messages that Deliver Results.

The short answer – you can’t ask customers to answer the question “why” for you.

I once had a client who began a new ad campaign and each time a new customer visited his business – he would grill them mercilessly on how they found him.  One poor woman who was subjected to this grilling kept trying to help- but she was certain she had seen a sign for the business and kept mentioning possible locations for the sign.  We were running a mix of television, radio and newspaper and the only sign he had was the one outside his retail store.

He desperately wanted his customer to answer the “why” for him.  She just couldn’t do it.  The reason she couldn’t do it was because she wasn’t conscious as she walked the path to the final buying decision.  The television ads we had been running combined with radio and newspaper ads had subtly influenced her over the past 12 weeks.  Then, when the time came to make a buying decision – she chose his business.

So while my client wanted to know why his new customer (the lifetime value of this customer was much higher than the previous 12 week media buy) chose his business – asking her why she chose him was kind of like asking the dude in the park why he’s wearing a tin foil hat. This same client was MUCH happier a few weeks later when another new customer cited his informative blog as being the main reason he chose his business.

It’s great when a customer is paying attention – but often they’re not.     When you can’t ask your customers to answer this question for you, then it’s time to begin playing detective to learn the answer to this powerful business building question.    Just like any great detective – you’ll be required to pick up on subtle clues your customers give you which tell you more than mere words can communicate.